Stacey Gagnon believes in the importance of embracing differences.

The Arizona nurse and her husband have six children, four of whom are adopted and have special needs. The kids range from 6 to 16 years old. The family is also in the process of adopting another child with special needs.

On Sunday, Gagnon shared a heartbreaking story on Facebook.

“Today hurt,” she began her post. Gagnon explained that her family went to a new church that day, and she brought her kids to a special area for children. As they entered the room, all of the other kids became quiet and stared or pointed at her 9-year-old son Joel, who was born with a craniofacial impairment and is missing an ear.

“I know he looks different, but today hurt,” she wrote. “I stood at the door and watched every child look with eyes wide and mouths open at my child. I stepped in and was about to address the entire class about differences; but then I stopped. I stopped and looked to the back of the room where my son had fled to hide. He had buried his head in his arms because you cannot hide in plain sight. My heart sank and the room remained silent as I walked back to Joel.” 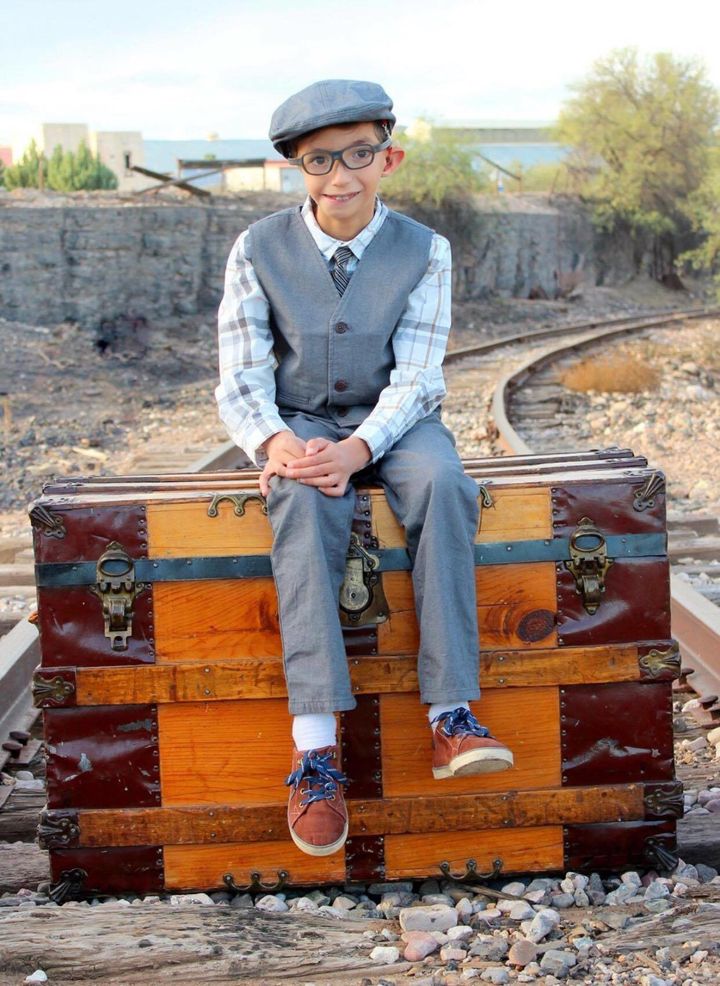 During the service, Gagnon held her son, and he drew “Joel loves Mom” on her palm. Her eyes filled with tears as she thought about how her son deserves more than stares and pointing. Although in the past, she tries to educate other children about differences, she was too busy comforting Joel in that moment.

Gagnon wrote that she was not angry and did not think those children were bad or mean. They just hadn’t learned any better. So she issued a call to her fellow parents:

“Teach your children that many people look different. Show them pictures of people that look different. And then explain that it is not okay to stare at someone that looks different, it’s not okay to point. Teach them that my boy is the same on the inside as your child is. He loves Dodge Ram trucks, and Minecraft, and digging in the dirt. He loves ketchup, but does not love broccoli. And mostly, he does not like people staring or pointing out that he looks different. I don’t think he needs this pointed out, it’s something he lives with everyday.”

“Show them pictures of people with different colored skin, different eyes, different abilities to talk, walkers to walk, wheelchairs to roll. Show them children with no hair, without an ear, without an arm. Take a moment and share all kinds of different. Now teach your child that a beautiful person is found with the heart; not the eyes.”

The mom told HuffPost the responses have been “beautiful,” though some were frustrating to read. “But it’s really about bridging an understanding and helping parents understand how to teach their child about kids like Joel,” she said.

Gagnon and her husband have education degrees and have worked as teachers for many years. “Children stare, but that doesn’t mean that it’s okay. Teaching empathy is not a curriculum; it’s a way of life,” she explains. “I must share with my children about others and what they might be feeling. I have to teach them to value others, especially those that are different. That value is found from the inside, not the outside.”

Joel is not Gagnon’s only child with differences. One child has spina bfida and uses a wheelchair, another suffered traumatic brain injury and another has a feeding tube and other special needs. The 2-year-old girl they’re in the process of adopting has limb differences.

Gagnon told HuffPost her experiences with international adoption have deeply affected her. “One month ago, I sat in an orphanage in Eastern Europe and held cast-off children ― Babies that were placed in government care because they were considered malformed. Children just like my son Joel, and my heart broke,” she said.